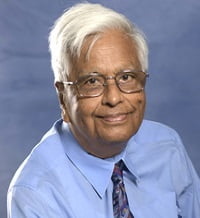 Govindjee’s outstanding contributions to photosynthesis research and education as well as his magnificent service to the photosynthesis community have been ongoing for over 60 years. Govindjee has done extensive research in the area of Photosynthesis: its Photochemistry, its Biochemistry, its Biophysics and its Molecular Biology. He retired in 1999. His current interest is in making plants, algae and cyanobacteria more productive; he has collaborations in China and India. He also lectures around the World on “Photosynthesis: Past, Present and Future” For publications, see: http://www.life.illinois.edu/govindjee

His pioneering contributions on the two light reactions and the two pigment systems, particularly on the water-plastoquinone oxido-reductase, Photosystem II. His focus has been on excitation energy transfer; primary photochemistry, and the role of bicarbonate in electron and proton transfer. His major tools have been kinetics and spectroscopy (absorption and fluorescence), and he has provided an understanding of both thermoluminescence and delayed light emission in plants and algae. He pioneered the use of lifetime of fluorescence measurements to study the phenomenon of photoprotection in plants and algae. He, however, is both a generalist and a specialist all at the same time. He communicates very effectively his passion for photosynthesis to the novice as well as professionals. He has been a prolific author, outstanding lecturer and an editor par excellence. He is the founder not only of the Historical Corner of Photosynthesis Research, but of the highly valued Series Advances in Photosynthesis and Respiration Including Bioenergy and Related Processes. He reaches out to young people by distributing Z-scheme posters, presenting Awards of books, and through tri-annual articles on “Photosynthesis Web Resources”. At home, at the University of Illinois at Urbana-Champaign, he has established student Awards for Excellence in Biological Sciences

Fellow of the American Association of Advancement of Science, 1976; Fellow and Life member of the National Academy of Sciences (India), 1979

Basics and Applications of Plant, Algal and Cyanobacterial Photosynthesis; Use of Chlorophyll a Fluorescence in predicting plant performance and productivity; Photosynthesis Education