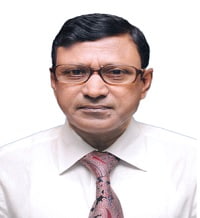 PROF. CHITTARANJAN KOLE is an internationally renowned scientist with a spectacular professional career spanning over 35 years. His life-time and original scientific contributions, specifically in the the fields of Genomics, Biotechnology, Climate Change and Biodiversity, to name a few, have been globally appreciated, leading to the the Outstanding Crop Scientist Award, which was conferred on him by the International Crop Science Society in 2012. During this exceptional career, Prof. Kole has developed a large number of original concepts and strategies, which have contributed enormously to science and benefited the global society. His scholarly publications include 150-plus research articles, most of which were published in the peer-reviewed international journals, 20 book chapters, and over 100 books with globally-reputed publishers.

His academic contributions have been profusely appreciated by seven Noble Laureates including Dr. Norman Borlaug, the Father of Green Revolution, and two World Food Prize Laureates, Prof. M.S. Swaminathan and Prof. G.S. Khush. His research contribitions have been recognized with several awards including Dr. Sadgopal Memorial Award in 1985, Crop Research Award in 2004, and Hind Rattan (Jewel of India) Award in 2010. The Indian Academy of Social Sciences honored him as an Honorary Fellow in 2014 in recognition of his contributions to science and society. The Indian Society of Genetics and Plant Breeding elected him a Fellow of the society in 2015. The Bioved Research Institute of Agriculture and Technology honored him with Honorary Fellow for his ‘outstanding contribution in the field of International Agriculture and Excellence in Educational Leadership’ in 2015. The Uttar Pradesh Academy of Agricultural Sciences has conferred on him Fellow-2015 award in recognition of his ‘outstanding contribution in the field of Crop Science’ in 2016. Recently, Henan Academy of Agricultural Sciences has conferred on him Honorary Fellow and Distinguished Professorship for “outstanding contribution to the world’s crop genetics, genomics and breeding research and facilitating international collaborations”.

Prof. Kole has worked as a researcher and faculty member in a large number of premier institutions and universities in India and abroad including the Russian (erstwhile USSR) Academy of Sciences, Russia; University of Wisconsin, USA; The Pennsylvania State University, USA, and Clemsom University, USA. In India, he has established and developed many academic units, such as Laboratory of Molecular Biology and Biotechnology at Orissa University of Agriculture and Technology as its Founding Principal Investigator; Department of Genetics and Plant Breeding at Allahabad Agricultural Institute as its Founding Head; Indo-Russian Center for Biotechnology as its First Projcet Coordinator; and Regional Nuclear Agriculture Research Center at Bidhan Chandra Krishi Viswavidyalaya as its Founding Center-in-Charge and Director.

He mentored 30 research students and 7 international scientists including one Fullbright Professor most of whom have grown internationally tall in teaching and research. Prof. Kole served as the Founding President of the Genome India International (GII). Currently, he is heading two international organizations including International Climate Resilient Crop Genomics Cosnsortium (ICRCGC) and International Consortium on Phytomedomics and Nutriomics (ICPN) as their Founding Principal Coordinator. In recognition of his international leadership quality, FAO invited Prof. Kole to act as a Co-Leader of the Climate Change theme for the FAO International Symposium on ‘The Role of Agricultural Biotechnologies in Sustainable Food Systems and Nutrition’ held at Rome during 15-17 February 2016.

He organized and chaired many prestigious international workshops; chaired several technical sessions; and delivered innumerable invited plenary lectures and keynote addresses in many international scientific meetings and platforms. He acted/is acting as a Editorial Board Member, Associate Editor or Guest Editor for over a dozen peer-reviewed international journals such as BMC Genomics, Euphytica, Plant Genetic Resources, International Journal of Plant Genomics, Tree Genetics and Genomics, etc.; and reviewed manuscripts  for over another dozen, such as Biologia Plantarum, BMC Biotechnology, Cytologia, Field Crops Research, Genome, Journal of Experimental Botany, Journal of Heredity, Molecular Biotechnology, Planta, Plant Breeding, Nature Plants, etc. He acted as the Regional Editor of American-Eurasian Network for Scientific Information, as a member of the International Advisory Board, Journal of Hill Agriculture; and as Advisory Board Member of Scientia Publication. He reviews regularly book proposals for Springer, Wiley-Blackwell and Taylor and Francis.

He has been a reviewer for many renowned funding agencies including National Science Foundation, USA, United States Department of Agriculture, United States Agency for International Development and Genome British Columbia, canada. Prof. Kole has served as a Professor in the Allahabad agricultural Institute, presently Sam higginbottom University of Agriculture, Technology & Sciences for 15 years where he has acted also as the Dean of the Jacob School of Biotechnology & Bioengineering. Prof. Kole has served successfully as the Vice-Chancellor of Bidhan Chandra Krishi Viswavidyalaya during December 2012-2015, the period which mostly facilitated  this university to rank 1st among the agricultural universities and institutions and 31st among all the registered multi-disciplinary universities and technological institutions in India as announced by the Ministry of Human Resource Development, Government of India as part of  ‘India Rankings 2016’ prepared under the National Institutional Ranking Framework.  Indian Chamber of Food & Agriculture has conferred Prof. Kole with the Life-Time Achievement Award in 2019. He has been awarded with the presitigious and highly competitive ‘Raja Ramanna Fellowship’ by the Department of Aromic Energy, Government of India to continue his researches at ICAR-National Research Center on Plant Biotechnology at New Delhi.